I am a comic book collector and happy to be one. I might say “proud” if I hadn’t, over a year ago, switched to reading digital as opposed to print comics. I feel a bit robbed of the tactile sensations of the hobby – of the turn of the page, the sneaking look to the panel a page over, the bagging and shorting and stacking and filing. Though I read my comics in a different medium than I used to, I still treat each Wednesday (comic book delivery day to specialty shops around the country) as different from the other days of the week. I subscribe and now, rather than go to the comic store to be handed the books pulled for my “Hold Slot,” I click a button on my iPad and watch them download.

Then I read them.

Rare is the week that I don’t read them all between Wednesdays and some weeks I have, well… let’s just say more comic books in my digital downloads than a grown man should. Comic book legend Will Eisner (creator of The Spirit) is one of the most influential men even to put pencil to drawing board in the pursuit of making comics. So influential was he that the industry awards (think the Oscars or the Emmys or the Grammys) are named The Eisner Awards. He called comic books “sequential art,” perhaps because he became embarrassed by his profession when he had to admit what he did for a living. This is my weekly reaction to the comics I read. 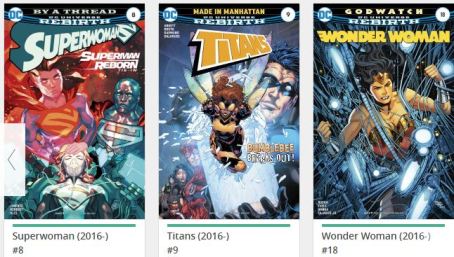 The best comic I read last week was Action Comics #975.

I think I loved this comic because it was clever, fun and had a terrific reveal at its conclusion. One of the mysteries that is the backbone of the DC Rebirth-ed universe is the mystery of Superman and this issue (along with interlocking issues of Superman) goes a long way to solving it.

Dan Jurgens is an underrated writer. He is like the baseball player who hits for average and drills the occasional home run. You forget how good he is because he’s so consistent. His work, especially as he handles two parents who are searching for their lost son, is terrific. I love that he was part of the great Superman stories of the 1990s and is part of great Superman stories now.

I have written before about the terrific talents of artist Doug Mahnke and those talents are on great display in this issue. He treats readers to solid panel work throughout but the real magic of the issue is a series of splash pages of some of Superman’s greatest adversaries. Excellent work.

I am really liking the old/new Superman and this story keeps me guessing in a very satisfying way.