At this point in my life, I have come to understand that we tend to idealize those people who have come and gone in our lives. By this I mean those we’ve lost to death or to movements and flows of life or to other circumstances both within and beyond our control. When those we love move out of our lives, we have a tendency to idealize them – who they were, what they stood for and what they said.

I guard against this temptation when I think of my father, though I am sure that a bit of idealization sneaks in. How could it not? I loved him. 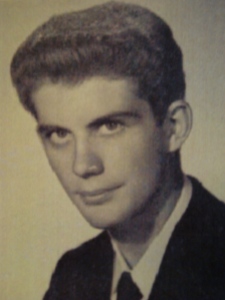 Dad attended the same Jesuit high school I did and he told great stories about it, including the undated, signed notes my grandmother would give him of the “Please excuse Mickey from class…” variety and the tale of a teacher picking up a talkative student’s desk and throwing that student, desk and all, through the door of the classroom without skipping a beat of his lesson.

Dad could also give advice, when asked, so, like a good son I never really asked him his advice about teaching. Terrible, isn’t it? Dad wasn’t a professional teacher, didn’t seem to have adored his educational life and I didn’t turn to him for advice when I chose the vocation.

Looking back on who he was and how he lived and, perhaps, idealizing him a bit, I think I can discern what he may have told me had I asked him.

Dad never took himself too seriously. Seriously. Though he was involved in a serious profession and found himself, in his work as a deacon, dealing with people in challenging times of life, he never let the moments get the best of him. He also never let himself think he was any better than anyone else. I remember him telling the story of when, during a baptism he was performing, he continually referred to the child – let’s call the baby “Chris” – as a boy when, in fact, she was a girl. “It’s a girl, dummy!” the baby’s grandmother finally corrected him during the ceremony. Dad loved to tell that story.

Teachers and administrators need a healthy dose of self-deprecation. If they take themselves too seriously, the work can become burdensome. They are public figures whose mistakes are going to be critiqued and scrutinized. If educators live and die with every challenging moment, the work can take a deeper emotional toll. Educators are well served by stepping back and smiling at themselves. Often.

Dad was very decisive. There may have been a lot of internal debate going on with my father and, surely, he and my mom talked about big decisions in their lives but, professionally and personally, Dad struck me as very decisive. Once he had made a decision, he didn’t spend too much time looking back.

Educators are called upon to make decisions minute-by-minute. While not all of these decisions are filled with import, many need to be made with confidence. This doesn’t necessarily imply that decisions must all be made quickly, but, once decisions are made, dwelling on and second guessing them as a matter of course can be very draining.

Dad had a great sense of humor. He could make fun of almost anything and could be highly irreverent.

Dad connected with people. When Dad died, I spoke in the eulogy about his “guys.” Dad had many, many “guys,” people whose lives and his had intertwined over the course of his work with the Church and simply because of the man he was. There was a great number of people who called Dad “friend” and a lot more whose lives had been touched by him and, surely, who had touched his life in turn.

Much like not having a well-developed sense of humor, it is possible for educators – teachers and administrators – to do the work without connecting with kids and with parents and with their colleagues. It is possible. I am just not sure how well the work is done by people who don’t enjoy connecting with others. Actually, I am pretty sure that those people don’t do the work nearly as well. Teachers and administrators must connect. It’s part of the job description.

Dad had a terrific sense of justice. I suppose having a strong sense of justice was part of Dad’s job description as a deacon. He was very in tune with this, could sense an imbalance of power or a bad situation readily and reacted strongly to them. He was motivated by those who had been abused by any system, inspired by David vs. Goliath stories, championed those who had less. The homeless came to Dad. He worked hard for those with less. He never stopped fighting in this area. He also, from the pulpit, didn’t shy away from talking about issues of justice, even when such homilies made people uncomfortable.

Educators are called to not only be fair and just, they are called to highlight injustice around them. They are called to act in a just manner and to point out to developing young minds the injustice that exists in the world. Further, they are compelled to help students understand that they can be part of changing unjust systems. If we’re not about this as we teach, we’re simply doing a disservice to students.

Dad was a great storyteller and loved to listen to others’ stories. I miss a lot about being able to talk with and listen to my Dad. I try to emulate much of what he was in my own life. Yes, as I have written above, I know that I idealize my father in many ways, but not in this one. Dad was a terrific storyteller and could command “the room” so to speak. He told wonderfully engaging and funny stories. He also loved to listen to others telling stories and would often ask for the same story to be told over-and-over again. He would want to hear about the same moment, the same incident, the same funny instance. And, when he listened, his reactions and smile and attention validated the storyteller and made that person feel very special.

Shouldn’t educators tell great stories? Beyond delivering content and inspiring skills in our students, shouldn’t we also be able to tell them great stories about our subject matter and convey or love of it? Shouldn’t we also listen to those around us at least as much as we speak to them?

My father, who professed a dislike of school and who I never heard anyone call “teacher” was one of the greatest teachers I ever had. He should have written a book about education. If he had, it would been titled Lessons about Teaching from a Guy Who Didn’t Like School.

I would have bought that book.